An unforgettable weekend of music-making

Come as an individual or bring your whole choir! Perform with more than 200 singers, collaborate with the Leonids, and get inspired by fellow participants.

The VanMan Choral Summit, Canada’s premiere TTBB choral festival, warmly welcomes all people singing tenor, baritone, and bass for a life-changing weekend of music-making, learning, connection, and community in the context of a male choir, regardless of gender identity or expression.

As a member of the VanMan Festival Singers you will:

The Leonids are a new TTBB chamber ensemble under the direction of Erick Lichte, drawn from North America’s finest professional ensemble singers. The Leonids come together briefly once a year in a supergroup to perform breathtaking music, just like the spectacular meteor showers after which they are named.

REHEARSE side-by-side with Chor Leoni and the world-class professional singers of The Leonids under the direction of Chor Leoni’s Artistic Director Erick Lichte at the VanMan Festival at the Chan Centre.

LEARN through small group sectionals, masterclasses, and seminars ways to improve your vocal and choral technique.

SING in the VanMan Summit Concert with Chor Leoni, The Leonids, and over 200+ singers, at one of Canada’s foremost concert halls, the Chan Centre for the Performing Arts.

SHARE the camaraderie and fellowship of singers from across North America and enjoy two included meals.

BELONG to a festival community striving to bring understanding and connection to the world through song. 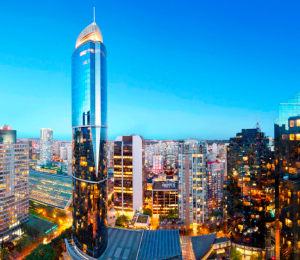 Situated across the street from St. Andrew’s-Wesley United in downtown Vancouver, the Sheraton Wall Centre is the perfect base for your VanMan weekend. As Chor Leoni’s official hotel sponsor, they are extending a special rate of as low as $119 a night for VanMan Festival Singers. To book, email reservations@wallcentre.com or call 604.331.1000 and mention ‘Chor Leoni Rate.’